Who Will Take Over Your Business When You’re Gone?

Succession planning may not immediately come to mind when you think of the most important activities of innovative, forward-thinking conscious companies. But I assure you that excelling through a major leadership transition — and thereby securing your company’s financial and impact-making future — is nearly impossible without a dedicated plan. Effective succession planning starts the day a new leader takes office and is a years-long effort to attract and cultivate future leaders.

Several years ago I watched a small business implode after a 14-year CEO resigned. There was no succession plan in place, and there was also a large leadership gap between the CEO and everyone else. An outside leader turned out not to be a good fit. Within months, 80 percent of the staff had resigned. And within two years, this 30-year-old business — a staple in the community — was completely eliminated.

Too many businesses falter at this critical moment: current leaders stay too long and the business loses relevancy. Often — and related — there are no next-generation leaders waiting in the wings. Despite the clear argument for securing the future, several qualitative obstacles stand in the way of a business creating a succession plan. Here’s where awakened leaders have a huge leg up.

The first and most universal obstacle to real succession planning is accepting the ever-looming reality of death. This could mean physical death, but this could also mean a figurative death of some kind: of an era or an identity, for example. A recent leadership transition of this type happened at a high-profile Bay Area consulting firm. After the 2016 presidential election, the firm made a shift to put racial equity at the core of their work. The CEO knew — though she never stated this publicly — that a white woman like herself could not lead into this new era, and stepped aside so they could appoint a leader of color.

When a founder or CEO recognizes that they will not be leading the organization forever, they are ultimately acknowledging mortality and death. Awakened leaders are brave enough to be vulnerable and show weakness, and by doing so, re-legitimize the ultimate passing of the torch: death, whether physical or symbolic.

On the road to death comes aging, another difficult truth of life and another major obstacle to effective succession planning. Aging, in contrast to death, connotes a slow, almost invisible process that could be easy to ignore or dismiss for years. Yet as founders and CEOs age, the business world around them charges full steam ahead. A current leader often cannot predict what future problems will emerge, and similarly cannot predict what solutions will become available to address them.

A gift of aging humbly and accepting some form of death is internal personal power, without which founders and CEOs will grip tightly to control and dominance. Future leaders must be cultivated through trust, delegation, and respect. Current leaders must be impeccably strategic about which projects they are willing to teach with. Future leaders need a space to grow into that embraces failure and learning without fear of retribution for perceived competition with current leadership. This is only truly possible when current leaders detach from their version of perfection and embrace an unknown, elegant solution that will come from someone else.

A close friend recently shared the story of taking over her father’s restaurant. To her dismay, he would not allow her to change a single thing about the restaurant — not even the curtains. Without any sense of ownership or control, she didn’t stay long, and her father lost his only opportunity for the family succession he’d hoped for. Instead, with an unshakeable sense of personal power, founders and CEOs need not worry about threats to their organizational power. Instead they can welcome — even invite — challengers.

These are qualitative obstacles that conscious leaders can and must overcome. Yet, from them stem quantitative obstacles, to complicate matters. If a business leader isn’t willing to detach, embrace aging, or accept death, they are unlikely to dedicate the capital needed to attract and cultivate future leaders. Furthermore, they are likely to spend more money on outside advisors to help fill the skills gap as they move further and further away from relevance, which could impact not only business-model efficiency but also employee morale. If, on the other hand, they are willing to take these leaps toward awakened leadership — and they are not easy — they will position the company well for attracting funding and talent. Investors and lenders often request a written succession plan to demonstrate long-term viability, and future leaders want to know there is a pathway for professional growth.

I have been inspired most by leaders who pass the torch at the height of their career. When they do, they have the capacity to usher the organization through a thoughtful CEO search and they set an example in humility by publicly acknowledging that others are better equipped to lead. But, perhaps most importantly, they demonstrate that, time and time again, rotation of leadership not only mitigates business risk through the simple, timeless concept of diversification, but is also written into the fabric of American democracy as a founding, bipartisan ideal.

What to Do When Losing a Leader

When a leader departs, elements of stability, especially institutional knowledge and relationships, are certainly lost. The challenge for a new leader is to resurrect as many relationships and memories as possible, and then begin the daunting task of building new ones. Customer Relationship Management systems (CRMs) can make it easier to track relationships as they are handed off, and conservative revenue models should show a loss of relationship-based income. Another trick is to record audio interviews with the departing leader that will live in perpetuity with the organization.

But perhaps the biggest element at risk when a long-time leader departs is employee morale. If the leader has been loved by the company and the wider community, it will be difficult, if not impossible, to fill that gap immediately. Establishing an interim plan can hold space for the loss while also providing operational stability in the meantime. An interim executive or board member could be in an acting role, for example. This will give the organization an opportunity for reflection on the next best fit.

No matter what, founders and long-time CEOs must be deeply honored at the time of departure. These leaders have taken a turn swinging the machete, forging a path through the tangled underbrush of socially-responsible business for the next generation. 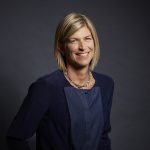 VF Corp’s Letitia Webster On the Role of Business In Building a Better World July 27, 2018